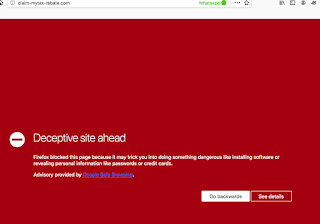 The above images show a local resident received the message on her mobile.

The screenshots have masked the links for obvious reasons, but one was passed to Bexley Watch and showed the link navigates to a ‘Deceptive site and blocked’ (red image).

The other is a mobile 07943499453 she was called from and again it is doing its rounds as another resident had a similar call. Both of them did not return the call nor clicked on the suspicious links. The mobile number that called was checked on the https://who-called.co.uk/ site and revealed its rating as ‘Dangerous’ as shown on the screenshot.

The residents have reported the scams to the authorities.

Example of an actual audio of HMRC scam message that did the rounds about Dec/Jan time from 0345 300 3900 an automated call regarding a fraud and arrest. He did not fall for that bait but contacted HMRC who told him the number is the same but that it was ‘cloned’.

Ways to spot a tax scam

It could be a scam if it:

Self Assessment customers can complete their tax return online and help and support is available on GOV.UK.

To protect against identity fraud customers must verify their identity when accessing HMRC’s online services. They must have two sources of information including:

If you’re concerned about falling victim to a potential scam, remember:

Check recent contacts from HMRC to help you decide if a suspicious email, phone call, text or letter could be a scam. Visit Check a list of genuine HMRC contacts for further guidance.